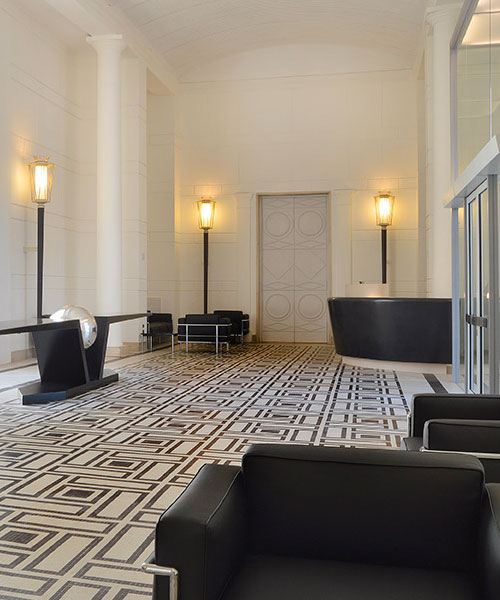 The Hotel Palazzo Esedra in Naples is located at the entrance to the Mostra d'Oltremare in the Campi Flegrei area, a few steps from the Cumana railway station, the underground line 2 station and near the Fuorigrotta exit of the Tangenziale.

Palazzo Canino, the building of the Hotel Palazzo Esedra in Naples was designed in the 1930s by the architect Marcello Canino and is of particular architectural interest. Marcello Canino created a series of buildings in Naples that changed the face of the city and can still be admired today, including the Palazzo dell'Intendenza di Finanza, the Palazzo INA in Piazza Carità, Palazzo Matteotti, headquarters of the Province and the Palazzo della Banca d 'Italy. The building, thanks to Prestige Hotels, has undergone a skilful renovation that has managed to preserve its characteristic elements while equipping the structure with all the comforts for hotel guests. Particularly striking is the peristyle with its colonnade and central basin. Here, during the summer, guests can have breakfast

The Hotel Palazzo Esedra in Naples has 106 rooms including 12 Junior Suites, 84 Double, 10 Single. It offers customers a buffet breakfast service which is served every day from 7.00 to 10.30, in the splendid frescoed room by the artist Emilio Notte. The restaurant is open every day from 10.30 to 23.30. The Concierge service is active 24/24. Furthermore, guests have access to free Wi-Fi connection in the common areas, an Internet Corner, lifts, safety deposit boxes, congress and restaurant services. Accessibility for the disabled is guaranteed. The hotel parking is free with reservations required and subject to availability.

Hotel Palazzo Esedra provides room service. Guests can enjoy their stay in Naples in complete relaxation and benefit from all the attentions that the hotel staff ensures with attention and discretion: a laundry service h24, the well-stocked minibar, the 32 "LCD TV, Pay TV, free internet connection with wired ADSL, safe deposit box, air conditioning. Disabled rooms and cots are available on request. The hotel staff is always at guests' disposal to ensure a pleasant stay in the name of comfort.omfort.

The Bar Bistrot of the Hotel Palazzo Esedra offers a restaurant service to hotel guests. It occupies one of the most beautiful rooms of Palazzo Canino, characterized by period decorative elements that are combined with the famous LC2 armchairs designed by Le Corbuisier exhibited at the Salon d'Automne de Paris in 1929. During the day it is the perfect place for meetings, work and a pleasant break away from the noise of the city. In the evening you will find the ideal atmosphere to end a dynamic Neapolitan day in complete relaxation.